Since  Psoriasis is a fairly common condition in all ages I have decided to upload some articles all about Psoriasis and possible treatments.

So …what is Psoriasis?

Psoriasis is an inflammatory skin condition which is not contagious.
There are five different types of psoriasis, of which by far the most common is plaque psoriasis which is a form that is suffered by approximately 80% of psoriasis sufferers. 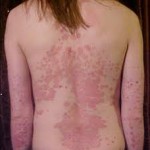 This particular form of psoriasis (also known as ‘psoriasis vulgaris’, with the latter word meaning common) usually appears as reddish patches of raised skin which are often covered in a silvery-white scale.
These skin patches, otherwise known as plaques (hence the condition name) or lesions are most commonly found on the elbows and knees, the scalp or sometimes in the lower back area of the sufferer.
Having said this, they are not restricted to these particular areas of the body and can appear anywhere on the head, torso or limbs.
The other less common types of psoriasis are:

• Guttate psoriasis which is characterized by small red spots on the skin. This particular form of psoriasis most commonly develops in children or teenagers who have a history of streptococcal infections;
• Erythrodermic psoriasis where the patient suffers widespread redness, severe itching and often pain.This is the least common type of psoriasis which is suffered by only 1% to 2% of people who have psoriasis, which is fortunate, because this particular type of psoriasis can in the most extreme cases be life-threatening. This is because in the most severe cases, large sections of skin are shed, meaning that there are areas of exposed, unprotected flesh which could be prone to infections (it is often compared to those who have suffered very bad burns);
• Inverse psoriasis is where the sufferer is likely to find small, smooth red lesions forming in bodily skin folds where warm, moist conditions (such as in the armpits, genital area etc) encourage smooth, non-scaly but nevertheless painful to the touch plaques and
• Pustular psoriasis which is characterized by patches of red skin at the center of which there are likely to be white pustules. This type of psoriasis occurs in less than 5% of sufferers, and is usually seen only in adults.
Irrespective of the particular type of psoriasis that an individual is suffering from, it usually causes at least a degree of discomfort which in some cases can become mild to severe pain. For psoriasis sufferers, it is a fact of their life that their skin is almost always itchy, and that it can often crack and bleed as well.
In the most severe cases, the pain suffered by someone who has psoriasis can be significant enough to prevent them handling every day tasks whilst also making settled sleep extremely difficult as well.

So What treatments are offered for Psoriasis …..read further..