What are Nasal Polyps 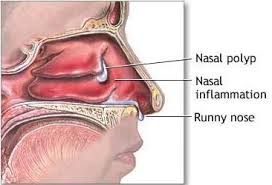 Nasal polyps are one of the few nose issues that cause serious inflammation, problems with breathing and block the passages and airways in the nostrils. They are essentially fleshy swellings, and can develop in the lining of the sinuses or the nose.
Nasal polyps may vary in size.

They can be small and unnoticeable, and cause no problems, but they can also be large and block the airways in the nose. They also vary in color, from yellowish brown to pink. Their shape is usually in the form of a teardrop. Once they start growing, nasal polyps take the form of a grape.

Diagnose nasal polyps
Once you start noticing symptoms (rummy nose, swelling around the eyes, inflammation in the nostrils, trouble breathing and similar), you should visit a doctor for a proper diagnose. There are few ways doctors can diagnose your nasal polyps. Those include:
– Endoscopy, or inserting an endoscope in the nostrils. Endoscope is a tube with a small camera at the end, and can record everything in the nose, including nasal polyps.
– Computer tomography scan is used as a last resort, since it emits radiation
– Skin prick allergy test is performed when small drops of agents are pricked into the skin. The agents that usually cause allergies are pricked into the upper back or on the forearm. If there are signs and symptoms of allergy after 15 minutes, the test is positive and you are diagnosed with nasal polyps.
– Cystic fibrosis is a test performed for young children. The test measures the amount of chloride and sodium in the sweat of the child.

Prevention and precaution
The best way to avoid getting nasal polyps is to do as much as possible to prevent them. There are many things you can do to prevent nasal polyps.
First of all, improve your immune system, as polyps usually develop due to chronic infections such as flu, cold and other sinus infections and respiratory illnesses.
Another way to prevent nasal polyps is to get plenty of sleep, and allow the body to rest so it can fight illnesses and infections. Seven or eight hours of sleep per day is recommended, and sometimes even naps help.
Balanced diet is the key to keeping the immune system healthy and providing enough nutrients to fight the illness. Try to intake more lean protein, wheat carbs, non fat dairy products, fruits and vegetables and unsaturated fats.
Exercise is another way to improve the immune system. The more you exercise, the healthier you are. As a general rule of thumb, try to get at least 30 minutes of exercise per day, five days a week. Exercising speeds up the metabolism and boosts the immune system. You need both cardio and strength exercises.
Last but not least, increase you vitamin C consumption. You need around 500 or 1000 mg per day to keep your immune system strong. Lack of vitamin C results in weaker immune system one that is vulnerable to illnesses.