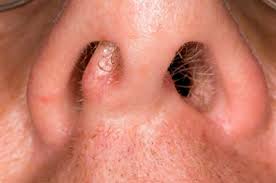 Nasal polyps can be very embarrassing and problematic. Apart from the fact that they are very unsightly, they can also reduce oxygen intake, create sleeplessness, and give you a persistent cold. They can be painful and often get infected.

You should not leave your nasal polyps untreated…

If these polyps remain untreated or not managed, they become larger and more can form. Large polyps can alter the shape of your face and be very painful.

A doctor will generally tell you that you have two options: steroids or surgery.

Generally, you will be told to start a steroid spray, or the doctor may inject steroids directly into the polyps. Steroids are effective in the short term, but once treatment is stopped, the polyps will grow again, and often to a larger size than they initially were. You could keep administering steroids, but these drugs can have serious side effects. They stunt growth in children, create eye complications such as loss of sight, cataracts and glaucoma, as well as cause diabetes and irritate you nose causing irregular bleeding. Other steroid side effects include headaches, nose bleeds and a sore throat.

Steroid sprays and drops will usually be prescribed if you have one or a cluster of small nasal polyps. Steroid tablets are effective in shrinking nasal polyps but may have weight gain as a side effect and can only be taken for a few weeks.

If the medical treatments have little or no effect, then next step is to seek surgery. The polyps can be removed by cutting them away; there are two types of surgery for nasal polyps.

1. Polypectomy – this is when the surgeon enters the nasal passages through the nostrils and is also the most commonly used surgery. The surgeon will use a local aesthetic and can sometimes remove some bone from the nose in an attempt to stop the reoccurrence of nasal polyps.

2. Endoscopic Sinus Surgery – this surgery will be used if there are clusters or relatively large nasal polyps that could be blocking the sinus passages. This is when the surgeon enters the nostril and nasal passages with a long thin tube with a camera on the end. Small cuts are usually made on the patients’ face; surgical instruments are then inserted in these cuts to remove the nasal polyps to open the sinus passages.

However, surgery is not a permanent cure. In fact, most patients (75%) who undergo surgery will get nasal polyps again, sometimes just a few weeks after surgery. Often, they will grow to larger sizes than they were initially.

There are also many risks involved as the surgery can cause scar tissue to form, creating discomfort and pain in your nose. Another complication is that damage can be caused to your eyes during the procedure or if the growths are very high in your passages there is a risk of brain fluid leaking.

Is There No Hope?

Neither steroids nor surgery are a permanent option, because re-growth is likely to occur. This is because what is causing the polyps to grow is still there. In other words, to keep the polyp from re-growing, you will need to re-program your body.

As always, nature has the answer. There are combinations of herbs which can shrink down your nasal polyps in as little as 4 days, and then you can make some lifestyle and dietary changes that will stop your body from growing the polyps ever again. For example, polyps generally grow as a result of the body being in an inflammatory state because there is too much arachidonic acid in the body. By eating less of certain foods, you will keep your inflammatory molecules to a minimum. In addition, by including some foods and supplements in your diet, you will help your body to produce anti-inflammatory molecules that combat nasal polyps re-growth. You can also avoid those things in your environment which can cause nasal polyps to grow.