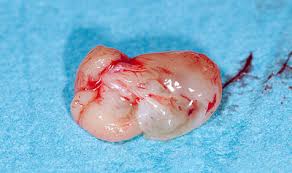 You might be wondering why you always have trouble with your breathing, and why your nose passages are clogged up. Those symptoms could be the result of nasal polyps. If that is the case, when you visit the doctor, there will be two remedies recommended; treat the condition with steroids in the form of nasal spray or go for surgery. However, both these treatments are not permanent cures and are associated with a number of dangers and side effects.

Nasal polyps can be identified as small or large, teardrop shaped masses of mucus. They are usually fairly movable and result from inflamed tissue in the passages of your nose and upper air ways. They usually start high up in the nose and grow over time, as your irritation increases. They are non-cancerous, and can result from a number of reasons.

If you are born with a deviated septum resulting in a slightly skew nose, or if you had an accident that causes your nose to be deformed, then this can result in these mucus masses growing over time. Another more common reason for them to appear is if you suffer from allergies which inflames and irritates the tissue in the nose. Even poor air quality, like being shut up in a stuffy room for hours, or living in an area where the air has a lot of pollution in it, can trigger the growth of nasal polyps.

This type of airway discomfort can be as small as a slight irritation, causing you to feel stuffy or occasionally you feel irritated in your nose. Or these polyps can result in far greater discomfort, causing serious problems and embarrassment. They often affect breathing, causing your nose to get clogged up and your nasal passages to close and resulting in you having to adopt ‘mouth breathing’, which is never a desirable trait in anyone. It can disrupt your sleep and can cause you to be more prone to colds and illnesses as you do not use your nose to filter the air you breathe. It can also cause you to not get enough oxygen intake; affecting your concentration and athletic abilities. All these are serious problems, and really negatively affect your everyday life.

Difficulty breathing and a stuffy nose are the result of nasal polyps, but there are other symptoms that help to distinguish it from just a normal common cold:

These mucus growths are treatable to an extent with medical help, but the problem is that medical solutions only provide short term treatment. Steroids need to be used continuously to keep the polyps down and once you stop them, the polyps will grow to a larger size then they initially were. And you will HAVE to stop them eventually, because steroids are associated with a multitude of side effects such as a weakened immune system, stunted growth, vision problems, persistent headaches, and more…

Surgery is the other option. It is expensive and many medical-aids do not pay for this type of alteration as it is deemed as cosmetic; because it alters the structure of the nose. Worse, it is a known fact that surgery is not a permanent cure and most patients (about 70%) will experience a re-growth of the polyps in just weeks after surgery. In addition, there are also many risks involved with surgery. Due to the fact that the surgery is so close to your eyes; there is a risk of damage to your orbits, as well as to the nasal tissue and wall and even brain fluid leaking. Sometimes surgery leaves deep scars in your nose which are uglier than the polyps themselves.

There are a number of natural solutions which provide fast, effective treatment for polyps and many people report complete shrinkage in just a few days of treatment. Natural options are free of side effects and the body does not develop a tolerance. Then, once the polyps have shrunk down, you can implement specific vitamins, minerals and nutrients in your diet to ensure that the polyps never come up again. By including these nutrients, you will be effectively blocking the pathways which can trigger a polyp growth; for example you will keep the body in an anti-inflammatory state, and this will make nasal polyps re-growth impossible. In addition, these dietary changes will prove beneficial for your general health. In fact, many people find that they have more energy and get ill less often. This is because your immune system will be in a much stronger shape, enabling your body to fight off not only nasal polyps growths but other ailments as well.