As we all know the new school year and college year is upon us with new courses, new friends, new lecturers and new challenges ahead !

This morning as I filled out the electronic register for a second year Health studies class that I had just met I was informed of someones absence because of a hospital visit for Eczema.

I was assured by the students that it was not that bad really as it was just all over her arms and legs but not all her body!…poor Girl.

One of my past colleagues in Spain also suffered from Eczema and there were many days that she was just in pain all over her body and struggled with getting through the day.
Now I do not know about you but that is quite a thing to carry around on a daily basis.

Having Eczema was also one of the reasons why this friend of mine was living in Spain as she believed that exposure to sunlight helped to alleviate the condition.

So what exactly is Eczema?
Well if you do a search on Google, many website will pop up that will tell you that Eczema symptoms include
dry skin that may become itchy, red and inflamed. It’s most commonly found in children, although adults can get it. 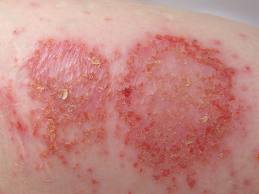 There are different types of Eczema. The most common is called atopic eczema…     or atopic dermatitis.

There also seems to be a relationship between stress and flareups of Eczema.
When I relayed this observation to the class it was greeted with much amusement and I was assured that the student concerned was the most laid back girl in the class.

Well I think maybe I will be the judge of that !

Eczema is often caused by an allergy, which occurs when your immune system overreacts to something that is normally harmless.

It is these allergic reactions, that make your skin itchy.

Conditions, like asthma, hay fever, and food intolerance, are also caused by allergies.

As I mentioned about my colleague in Spain who was living there because of her Eczema…. there is a belief that
low vitamin D may be linked with eczema and other allergies. Ultraviolet light causes the body to make vitamin D and so areas with high sunlight produce more Vitamin D  and so the occurrence of Eczema should be lower.

If this is clinically true then it makes sense that exposure to more UV light might lower the risk of these conditions,
I know that my friend definitely had an improvement in her Eczema while living in Spain but at the moment there is not really enough evidence to  be sure


To investigate this further, research Studies have been done on 7,643 children aged 4 to 5 and 8 to 9 in different regions of Australia,where the amount of daylight sun varied greatly,
They looked at how common food allergies, eczema, and asthma were in these areas, to see if there is a link between sunlight and these conditions.

The results showed that eczema, peanut allergies, and egg allergies were more common in those who lived furthest south, where there was the least sun

In  fact the rates of occurrence  of cases was twice as likely with peanut allergies or eczema, and three times as likely to have an allergy to eggs, compared with those who lived far north in the areas with more sun.

What was interesting was the figures showed no difference between regions in how likely children were to have asthma,or the other food allergies the researchers studied, which included allergies to cow’s milk, soy, sesame, and wheat.

The researchers felt that this could be because these allergies develop in a different way to eczema and other food allergies.

Ok… so can we say this is conclusive results?

The  data comes from a large number of children, which usually makes results more reliable. The researchers also studied  children who lived in different areas, but within the same country with the same health system and similar social background.

However they used used questionnaires to ask the parents of the children about the conditions and allergies, and we can’t be sure how accurate the information was. It may have been more reliable to collect information from the children´s medical records,where one could have looked only at allergies that had been diagnosed by a doctor.

Also, how can we be sure that  the children in the high sun regions had a lower risk of these conditions because of their sun exposure. There could have been other variables involved such as diet and family history and  also other factors in the environment

Why are you still suffering with Fibromyalgia pain?
The Top Five Worst Foods For your Joints
Scientific Breakthrough Eliminates Herpes

tagged with Having Ecxema, Spain, UV