So what is this Ebola Virus about? 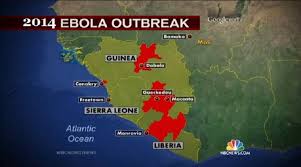 Most of us listening to the news will have worked out the seriousness of the Ebola virus that is sweeping West Africa.

There is a state of emergency there with Schools  closed,  house-to-house searches for the sick, and the number dead is rising each day.

To put you completely in the picture this virus is 90% fatal. 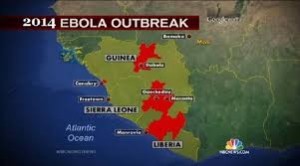 So Lets ask those common questions and see what this Virus is about.

How does this virus  exert its power and what are the symptoms?

Early symptoms are fever, headache, fatigue. and low blood pressure. The virus destroys the immune system. It  makes the capillaries (the smallest of the bodys blood vessels) permeable, which allow fluid to leak in and also the body to leak fluid. The result looks like blisters on the skin. As the fluid in the body is leaking from the   blood vessels  then the  blood pressure drops.. The person goes into shock, their organs fail, and they die. ….pretty lethal stuff.

There is no cure and the only thing that doctors can do is try to keep the blood pressure up by giving the person fluids, and trying to  make sure the organs do not fail.

How is Ebola passed from one person to another?

It is passed from one person to another by the transmission of body fluid.  This  means the Ebola virus  is very dangerous to doctors because they can get it if they are in contact with a sick person and the virus gets in through broken skin, or any other way.  If you âre caring  for someone who has the disease, or taking care of the body of someone who has died from it, you can contract it. It is a very dangerous because there is no cure for it and also it works extremely fast.

You cannot really catch it by sitting next to someone. But if you make contact with them at all, and bodily fluids are exchanged, then you can contract it. For example, if they spit and you come into contact with it, you can get it.

You may not show signs of disease for up to three weeks, but most people begin to show signs roughly a week after infection. Death comes within a few days to another week.

What about the Virus coming  to the US or UK?

The chances of that happening are very slim because the virus works so fast and  by the time the person gets on the plane, they might be dead before they reach the U.S. or the UK

I have just come back from a trip to South Africa but from what I  have read I agree with the Government that traveling to Africa is not a good idea right now.

This is the largest out break ever in Africa and from growing up in East Africa I know first hand that diseases travel fast and are difficult to keep under control because of the isolation and detection in small villages etc.

So should we be concerned?

Mmmm….. well just recently a man with the virus nearly boarded a plane for USA?

The U.S. Peace Corps has evacuated hundreds of its volunteers from affected countries after two of its workers had contact with an Ebola victim who died. The workers are now under isolation.

The U.S. Centers for Disease Control issued a travel advisory Thursday warning Americans not to travel to the three countries stricken with Ebola, Sierra Leone, Liberia, and Guinea.

I feel people should be aware of the disease and that is why I have written this article.  There is however no reason to panic.

Should you go to help? Is it worth the danger?

If you go .and that is your decision you must have the correct isolation suits ,the right isolation facilities and be with a professional team that are clued up on the protocol with dealing with this virus